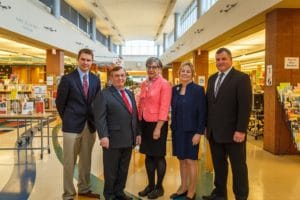 
NebraskaLink, a communications company providing state-of-the-art fiber-optic network access across Nebraska, announced this week that they have completed a project connecting all Lincoln Public Libraries through a newly constructed fiber-optic network that will allow for virtually unlimited Internet access. The library located at 27th and South Street was the eighth and final library to be connected marking the completion of the project.The fiber construction began with a $334,000 grant from the Nebraska Public Service Commission to connect all eight city library locations. NebraskaLink also invested in the project with an in-kind contribution exceeding $600,000 which included access to existing NebraskaLink infrastructure, fiber, equipment and labor. Prior to the network expansion, Lincoln City libraries had access to 20 Mbps for Internet connectivity. Since the completion of this project, each library now has access to 1 Gbps, a nearly 1,000% increase in broadband speed for library patrons.

“The Nebraska Public Service Commission is pleased that the Lincoln Libraries made use of these grant funds in this manner and we appreciate the support of NebraskaLink in carrying out the construction of this project,” said Frank Landis, Nebraska Public Service Commissioner. “We applaud the Lincoln Libraries and NebraskaLink for stepping forward to expand broadband access in Lincoln.”

Library Director Pat Leach has been involved with the project from the beginning. “We are so excited to have increased broadband access for Lincoln’s libraries. For many of our Lincoln residents, this may be the only source of broadband Internet access available to them. NebraskaLink understood the importance of the fiber project for our community and they went above and beyond expectations in seeking funding and completing the project sooner than originally promised.”

NebraskaLink has constructed a state-of-the-art, high speed fiber optic network to connect business, industry and government entities across the state of Nebraska. Offering a full suite of communications services, including Ethernet transport and direct Internet access, NebraskaLink continues its aggressive network expansion while setting a new standard for reliability. For more information, please visit www.nebraskalink.com or call 402-817-1878 to visit with a NebraskaLink team member.